Antigonish (or “The Little Man Who Wasn’t There”)

Yesterday, upon the stair,
I met a man who wasn’t there
He wasn’t there again today
I wish, I wish he’d go away…

When I came home last night at three
The man was waiting there for me
But when I looked around the hall
I couldn’t see him there at all!
Go away, go away, don’t you come back any more!
Go away, go away, and please don’t slam the door… (slam!)

Last night I saw upon the stair
A little man who wasn’t there
He wasn’t there again today
Oh, how I wish he’d go away…

Hughes Mearns wrote this well-known rhyme in 1899 as a song for a play he had written, called The Psyco-ed. The play was performed in 1910 and the poem was first published as “Antigonish” in 1922. Mearns also wrote many parodies of this poem, entitled, Later Antigonishes.

From Favorite Poems of Childhood 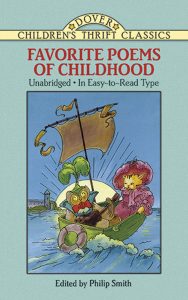 This superb treasury of time-honored poetic gems includes Lewis Carroll’s “The Walrus and the Carpenter,” Edward Lear’s “The Owl and the Pussy-Cat,” Eugene Field’s “Wynken, Blynken and Nod,” Emily Dickinson’s “I’m Nobody! Who are you?,” Robert Louis Stevenson’s “The Swing,” many more. Printed in large, easy-to-read type.

William Hughes Mearns (1875–1965), better known as Hughes Mearns, was an American educator and poet. A graduate of Harvard University and the University of Pennsylvania, Mearns was a Professor at the Philadelphia School of Pedagogy from 1905 to 1920. Mearns is remembered now as the author of the poem “Antigonish” (or “The Little Man Who Wasn’t There”), but his ideas, about encouraging the natural creativity of children, particularly those age 3 through 8, were novel at the time. It has been written about him that, “He typed notes of their conversations; he learned how to make them forget there was an adult around; never asked them questions and never showed surprise no matter what they did or said.”