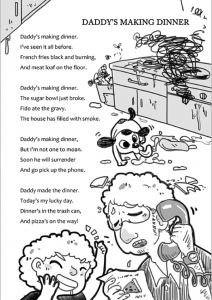 Daddy’s making dinner.
I’ve seen it all before.
French fries black and burning,
And meat loaf on the floor.

Daddy’s making dinner,
But I’m not one to moan.
Soon he will surrender
And go pick up the phone.

Daddy made the dinner.
Today’s my lucky day.
Dinner’s in the trash can,
And pizza’s on the way.