I Froze My Mother 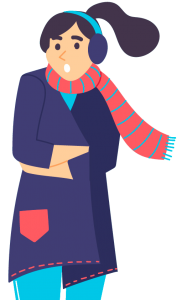 Yesterday, the strangest thing
I’ve ever seen occurred.
I froze my mother in her tracks
with just a single word.

Her arms went limp, her eyes got wide,
her fork fell on the floor.
I’ve never seen my Mom
exactly act that way before.

I got a little scared at first,
and kept my fingers crossed,
but when she blinked and laughed,
I knew she’d started to defrost.

I’ll never know for certain
what made her freak and freeze.
She asked me if I wanted more,
and all I said was “Please.”

And then, today, she made my lunch,
I told her “Thanks!” and then,
my very silly mother went
and froze right up again.

Copyright © 2009. All Rights Reserved. From I Froze My Mother: And Other Seriously Funny Family Poems. Young Poets Press. Reprinted by permission of the author.

This was one of the earliest poems to tumble out of my pencil. Ah, the magic and power of politeness—with moms and everyone—it makes good stuff happen. I highly recommend it.

From I Froze My Mother: And Other Seriously Funny Family Poems 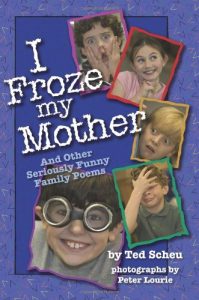 Ted Scheu is fast establishing himself as one of the top poets for children in the US. In I Froze My Mother and Other Seriously Funny Family Poems he manages to capture—with honesty and loads of rich, ironic humor—all the dreams, screams, groans, and giggles of family life, seen through the clear eyes of a child. Children ages 6 to 11 find rhyming answers to nagging questions about dealing with puzzling parents and siblings. Titles include “I Froze My Mother,” “The Alien in Our Bathroom,” “My Father is a Baby,” “How to Beat a Bully,” and “Scream Quietly, Please.” Sprinkled in among these 58 fun and funny poems are startlingly beautiful photo illustrations from the camera of Peter Lourie. His black and white, close-up images of kids perfectly compliment the adjacent poems. This updated edition of “I Froze My Mother” is one of the freshest collections of poems for kids to tumble down the stairs in years. 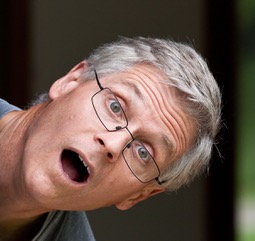