or Cruelty to Fabulous Animals

No unicorn, with Henry’s leave,
Could dance upon the lawn at eve,
Or gore the gardener’s boy in spring
Or do the very slightest thing.

No unicorn could safely roar,
And dash its nose against the door,
Nor sit in peace upon the mat
To eat the dog, or drink the cat.

Henry would never in the least
Encourage the heraldic beast:
If there were unicorns about
He went and let the lion out.

The lion, leaping from its chain
And glaring through its tangled mane,
Would stand on end and bark and bound
And bite what unicorns it found.

And when the lion bit a lot
Was Henry sorry? He was not.
What did his jumps betoken? Joy.
He was a bloody-minded boy.

The Unicorn is not a Goose,
And when they saw the lion loose
They grew increasingly aware
That they had better not be there.

And oh, the unicorn is fleet
And spurns the earth with all its feet.
The lion had to snap and snatch
At tips of tails it could not catch.

Returning home in temper bad,
It met the sanguinary lad,
And clasping Henry with its claws
It took his legs between its jaws.

“Down, lion, down!” said Henry, “cease!
My legs immediately release.”
His formidable feline pet
Made no reply, but only ate.

The last words that were ever said
By Henry’s disappearing head,
In accents of indignant scorn,
Were “I am not a unicorn.”

And now you know why Henry sleeps,
And why his Mother mourns and weeps,
And why she also weeps and mourns;
So now be kind to unicorns.

From Humorous Poetry for Children. The World Publishing Company.

From Humorous Poetry for Children 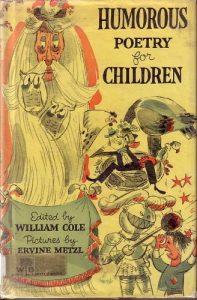 Fun—from smiles to hearty laughter—is in store for all who browse through these pages. And those who haven’t tried reading poetry before needn’t feel bashful about picking up this volume. For its only aim is to give the reader a good time. And only a sense of humor is required. 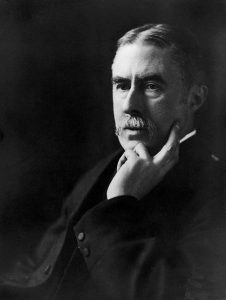 Alfred Edward Housman, usually known as A. E. Housman, was an English classical scholar and poet who lived from 1859-1936. Housman was one of the foremost classicists of his age and has been ranked as one of the greatest scholars who ever lived.