My Dog Has Got No Manners 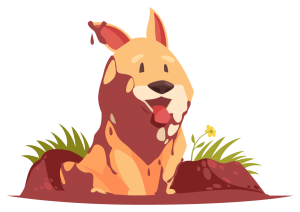 My dog has got no manners.
I think he’s very rude.
He always whines at dinnertime
while we are eating food.

And when he’s feeling thirsty
and wants to take a drink,
he takes it from the toilet
instead of from the sink.

He never wears a pair of pants.
He doesn’t wear a shirt.
But worse, he will not shower
to wash away the dirt.

He’s not polite to strangers.
He bites them on the rear.
And when I’m on the telephone,
he barks so I can’t hear.

When I complained to Mommy,
she said, “I thought you knew:
the reason that his manners stink-
he learns by watching you.”

Copyright © 2000. All Rights Reserved. From If Pigs Could Fly: and Other Deep Thoughts. Running Press. Reprinted by permission of the author.

From If Pigs Could Fly: and Other Deep Thoughts 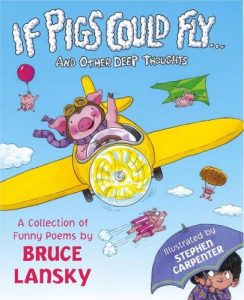 If Pigs Could Fly… and Other Deep Thoughts is a collection of Bruce Lansky’s own hilarious poems about everything kids are concerned with, including: smelly diapers, chubby relatives, toothless grandmas, dirty socks, impolite dogs, burping babies, bad hair days and more. The poems in this book have been tested on over 1,000 schoolchildren and their teachers so that only the most giggle-packed poems are included. 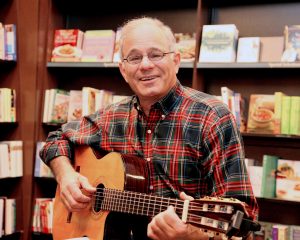 Bruce Lansky was first called “the King of Giggle Poetry” by the students of a school in North Miami Beach, Florida whose teacher “kidnapped” Lansky and forced him to perform at her school at needle point. The title refers to Lansky’s third poetry book: A Bad Case of the Giggles. Altogether he has written or edited 20 humorous poetry and song books which have sold about 4 million copies. He visits schools, because he loves hanging out with kids (unfortunately, his grandchildren live in Sweden, so he only sees them once a year).

Other Books by Bruce Lansky 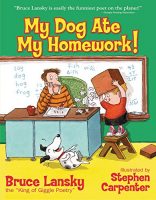