Nobody Knows Where Our Bus Driver Goes 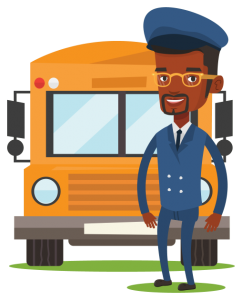 Nobody knows
Where our bus driver goes
While all of us kids are at school.
Does he study the map,
Does he take a nice nap,
Or lazily lounge by the pool?

Nobody knows
Where our bus driver goes
Nor what he may do with his time.
Does he work for the mayor,
Is he off cutting hair,
Or secretly out fighting crime?

Nobody knows
Where our bus driver goes.
He’s prob’ly a spaceman from Mars.
But he might be a spy,
Or a rock-n-roll guy
Who’s flailing on ‘lectric guitars.

Nobody knows
Where our bus driver goes.
He leaves us each morning at eight.
All that we see
Is our bus back at three,
And, boy, we’re sure glad he’s not late!

Copyright © 2016. All Rights Reserved. From The Toy Box Ate My Brother. JPFK. Reprinted by permission of the author.