Sarah Cynthia Sylvia Stout Would Not Take the Garbage Out 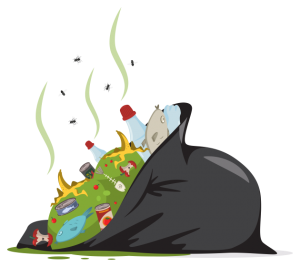 Sarah Cynthia Sylvia Stout
Would not take the garbage out!
She’d scour the pots and scrape the pans,
Candy the yams and spice the hams,
And though her daddy would scream and shout,
She simply would not take the garbage out.
And so it piled up to the ceilings:
Coffee grounds, potato peelings,
Brown bananas, rotten peas,
Chunks of sour cottage cheese.
It filled the can, it covered the floor,
It cracked the window and blocked the door
With bacon rinds and chicken bones,
Drippy ends of ice cream cones,
Prune pits, peach pits, orange peel,
Gloppy glumps of cold oatmeal,
Pizza crusts and withered greens,
Soggy beans and tangerines,
Crusts of black burned buttered toast,
Gristly bits of beefy roasts. . .
The garbage rolled on down the hall,
It raised the roof, it broke the wall. . .
Greasy napkins, cookie crumbs,
Globs of gooey bubble gum,
Cellophane from green baloney,
Rubbery blubbery macaroni,
Peanut butter, caked and dry,
Curdled milk and crusts of pie,
Moldy melons, dried-up mustard,
Eggshells mixed with lemon custard,
Cold french fried and rancid meat,
Yellow lumps of Cream of Wheat.
At last the garbage reached so high
That it finally touched the sky.
And all the neighbors moved away,
And none of her friends would come to play.
And finally Sarah Cynthia Stout said,
“OK, I’ll take the garbage out!”
But then, of course, it was too late. . .
The garbage reached across the state,
From New York to the Golden Gate.
And there, in the garbage she did hate,
Poor Sarah met an awful fate,
That I cannot now relate
Because the hour is much too late.
But children, remember Sarah Stout
And always take the garbage out!

Copyright © 1974. All Rights Reserved. From Where the Sidewalk Ends: The Poems and Drawings of Shel Silverstein. HarperCollins Publishers.

Published in 1974, Shel Silverstein’s book Where the Sidewalk Ends is arguably one of the most important collections of children’s poetry ever published. One of the poems from this book, “Sarah Cynthia Sylvia Stout Would Not Take the Garbage Out,” is one of the most well-known and beloved children’s poems of all time.

A “cautionary tale” along the lines of Hillaire Belloc‘s “Jim, Who Ran Away from His Nurse and Was Eaten by a Lion” and “Rebecca, Who Slammed Doors for Fun and Perished Miserably” (from his book Cautionary Tales for Children), “Sarah Cynthia Sylvia Stout” was most likely inspired by a much earlier poem by William Bright Rands, entitled “Godfrey Gordon Gustavus Gore.” “Godfrey Gordon Gustavus Gore” was written in the mid-1800s and published in Rands’ book Lilliput Lyrics in 1899. Both poems tell the story of a child who ignored their parents pleadings, leading to exaggerated fates, and both feature alliterative, four-name protagonists.

As with “Sarah Cynthia Sylvia Stout,” many of Silverstein’s poems were inspired by poems written long before he began writing poetry. For example, his poem “Pinocchio” from his book Falling Up was clearly inspired by Laura E. Richards poem “Antonio, Antonio” from her book Tirra Lirra: Rhymes Old and New and his poem “Ickle Me, Pickle Me, Tickle Me Too” was probably based on Eugene Fields’ poem “Wynken, Blynken, and Nod” from his book Lullaby Land: Songs of Childhood.

In addition to being a cautionary tale—a story that warns its listener of a danger—”Sarah Cynthia Sylvia Stout” is several other things as well.

It may also be worth mentioning that Silverstein makes extensive use of several poetic techniques in this poem. In addition to rhyme and meter, the poem contains many alliterations, such as “black burned buttered toast” and “gobs of gooey bubble gum,” as well as internal rhymes such as “Soggy beans and tangerines” and “Rubbery, blubbery macaroni.”

All these things taken together help explain the enduring appeal of “Sarah Cynthia Sylvia Stout Would Not Take the Garbage Out,” just one of the more than 100 poems in Where the Sidewalk Ends.

From Where the Sidewalk Ends: The Poems and Drawings of Shel Silverstein 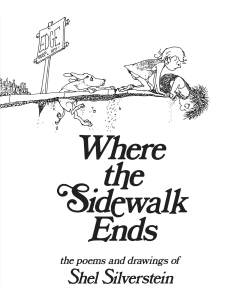 Shel Silverstein, the New York Times bestselling author of The Giving Tree, A Light in the Attic, Falling Up, and Every Thing On It, has created a poetry collection that is outrageously funny and deeply profound. Come in . . . for where the sidewalk ends, Shel Silverstein’s world begins.

You’ll meet a boy who turns into a TV set, and a girl who eats a whale. The Unicorn and the Bloath live there, and so does Sarah Cynthia Sylvia Stout who will not take the garbage out. It is a place where you wash your shadow and plant diamond gardens, a place where shoes fly, sisters are auctioned off, and crocodiles go to the dentist.

Shel Silverstein’s masterful collection of poems and drawings stretches the bounds of imagination and will be cherished by readers of all ages. This is a collection that belongs on everyone’s bookshelf. Makes a great gift for special occasions such as holidays, birthdays, and graduation. 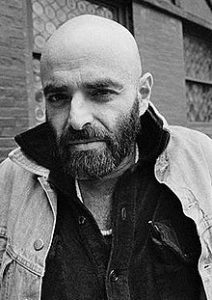 Sheldon Allan “Shel” Silverstein was an American writer known for his cartoons, songs, and children’s books. He styled himself as Uncle Shelby in some works. His books have been translated into more than 30 languages and have sold more than 20 million copies. He was the recipient of two Grammy Awards, as well as Golden Globe Award and Academy Award nominations.

Other Books by Shel Silverstein 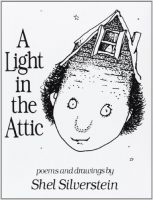 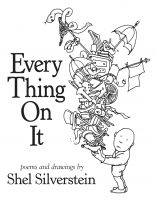 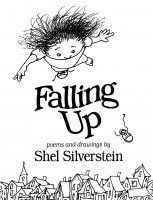