Please don’t bang!
Or slam!
Or buzz!
And please no loud
bansheeing!
Do not click!
And do not clunk!
I’m onomatopoeiaing.

Copyright © 2011. All Rights Reserved. From Poems I Wrote when No One Was Looking. Margaret K. McElderry Books. Reprinted by permission of the author.

From Poems I Wrote when No One Was Looking 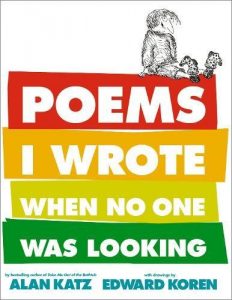 Laugh out loud on this hilarious journey through the kooky creations of Alan Katz and Edward Koren. From the giggle-until-it-hurts author that brought you the Silly Dilly series, this collection of side-splitting verse will have readers slapping their knees and rolling in the aisles. Whether you’re staying out of trouble or constantly causing it, these rowdy rhymes turn our wacky world upside-down to reveal the pitfalls of hopeless homework, tricky travels, sibling shenanigans, and everything in between. 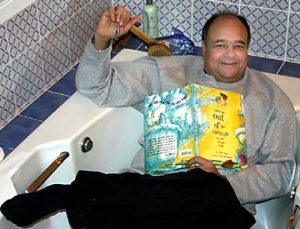 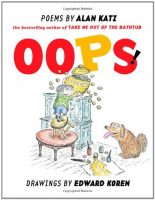 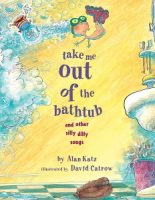