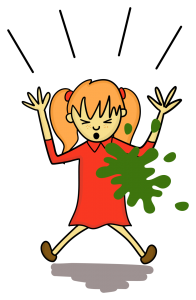 Her mother, looking most displeased,
Said, “Use a hanky when you sneeze,
“Or soon you’ll find that small achoo
“Will spread from here to Kathmandu.
“What’s more,” she said, “I’ve had enough
Of seeing all that slimy stuff.”

Well, little did young Bessie know
That sneeze of hers could really go.
It left her town and then went on
Past Norway, Russia and Hong Kong,
Across the land and over seas
Right to the shores of Italy.

The sneeze fell down like green confetti,
Onto some poor man’s spaghetti.
“Cripes!” he cried, and then, “Oh, blimey!
“All my bolognaise is slimy!
“I had asked for grated cheese,
“Not someone else’s horrid sneeze.”

The sneeze flew via Mexico
Then headed north through sleet and snow,
Past polar bears and arctic deer,
Across the Northern Hemisphere.
And, dearie me, that slimy sniff
Before too long was frozen stiff.

The penguins cried, “We must vamoose!
“There’s frozen sneezes on the loose!”
They hid behind their penguin wings
And said, “These are disgusting things
That must have come from Sanford Heath,
From one without a handkerchief!”

The sneeze then headed south to Spain,
Past Poland, France and through Ukraine,
Until one day that germy beast
Picked up the pace and headed east,
To find a cosy office block
Within the city of Bangkok.

“A sneeze! A sneeze!” the workers cried,
“However did it get inside?”
From desk to desk the achoo went,
Before escaping through a vent.
The boss said, “People, would you please
“Employ a hanky when you sneeze?”

For fifty days that sniffle flew,
Through Germany and Sweden too,
Past Belgium, Finland and Bombay,
Then onward to the USA,
Until around the whole big world
Young Bessie’s small achoo had whirled.

And after that, it hurtled back,
To end right where it started at,
And found its final resting place,
All over Bessie-Jo’s young face.

Copyright © 2020. All Rights Reserved. From Don't Wear Your Knickers on Your Head: And Other Very Serious Poems about Really Important Stuff. Llama House Books. Illustration by Becci Murray. Reprinted by permission of the author.

From Don't Wear Your Knickers on Your Head: And Other Very Serious Poems about Really Important Stuff 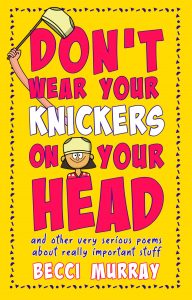 You’ll find lots of very serious poems about really important stuff (like toenails, sausages and yaks) in this hilariously irreverent collection of illustrated poetry from children’s author Becci Murray. Don’t Wear Your Knickers on Your Head is the new rib-tickling read for ages 6 – 10 years. 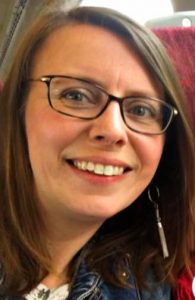 Becci Murray is a British author from Gloucestershire. She used to run a children’s entertainment company, where she earnt a living playing musical bumps and doing the Hokey Cokey (true story). Her favourite books are by Roald Dahl and she has a life-size BFG sticker on her bedroom wall (well, almost life-size). Becci is the author of the StoryQuest series and her first poetry book was entitled, ‘Don’t Wear Your Knickers on Your Head (and Other Very Serious Poems About Really Important Stuff).’

You can learn more about Becci or send her a message by visiting the Llama House Children’s Books website – she would love to hear from you!

Other Books by Becci Murray