There’s a Bully in My Locker 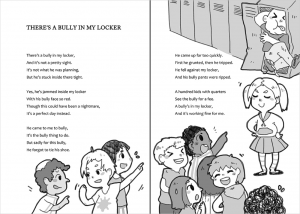 There’s a bully in my locker,
And it’s not a pretty sight.
It’s not what he was planning,
But he’s stuck inside there tight.

Yes, he’s jammed inside my locker
With his bully face so red.
Though this could have been a nightmare,
It’s a perfect day instead.

He came to me to bully,
It’s the bully thing to do.
But sadly for this bully,
He forgot to tie his shoe.

He came up far too quickly.
First he grunted, then he tripped.
He fell against my locker,
And his bully pants were ripped.

A hundred kids with quarters
See the bully for a fee.
A bully’s in my locker,
And it’s working fine for me.