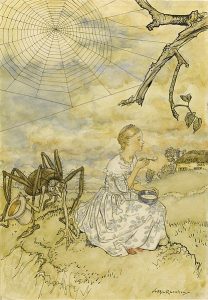 Little Miss Muffet discovered a tuffet,
(Which never occurred to the rest of us)
And, as ’twas a June day, and just about noonday,
She wanted to eat—like the best of us:
Her diet was whey, and I hasten to say
It is wholesome and people grow fat on it.
The spot being lonely, the lady not only
Discovered the tuffet, but sat on it.

A rivulet gabbled beside her and babbled,
As rivulets always are thought to do,
And dragon-flies sported around and cavorted,
As poets say dragon-flies ought to do;
When, glancing aside for a moment, she spied
A horrible sight that brought fear to her,
A hideous spider was sitting beside her
And most unavoidably near to her!

Albeit unsightly, this creature politely
Said: “Madam, I earnestly vow to you,
I’m penitent that I did not bring my hat. I
Should otherwise certainly bow to you.”
Though anxious to please, he was so ill at ease
That he lost all his sense of propriety,
And grew so inept that he clumsily stept
In her plate—which is barred in Society.

This curious error completed her terror;
She shuddered, and growing much paler, not
Only left tuffet, but dealt him a buffet
Which doubled him up in a sailor-knot.
It should be explained that at this he was pained:
He cried: “I have vexed you, no doubt of it!
Your fist’s like a truncheon.” “You’re still in my luncheon,”
Was all that she answered. “Get out of it!”

From Mother Goose for Grown-Ups 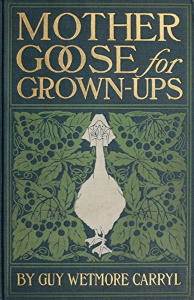 Mother Goose for Grownups is an anthology of Carryl’s humorous light verse, published in 1900 by Harper & Brothers, New York and London. These poems are parodies of the old traditional Mother Goose nursery rhymes. The volume was illustrated by Peter Newell and Gustave Verbeek. 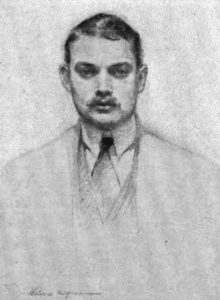 Guy Wetmore Carryl was an American humorist and poet who lived from 1873 to 1904, and the son of children’s author Charles Edward Carryl. His collections of poetry included Mother Goose for Grown-Ups, Grimm Tales Made Gay, and Fables for the Frivolous.